Which of the following is a classful routing protocol?

Which of the following are characteristics of Enhanced Interior Gateway Routing Protocol (EIGRP)? (Choose all that apply.)

Explanation:
EIGRP does not require a hierarchical physical topology. It uses Diffusing Update Algorithm (DUAL) to provide loop prevention, and it supports Message-Digest Algorithm 5 (MD5) authentication. It can differentiate between internal and external routes, and uses a 32-bit metric.

EIGRP is a classless protocol that allows the use of variable length subnet masks (VLSM) and supports classless interdomain routing (CIDR) for allocation of IP addresses. The following are characteristics of EIGRP:

EIGRP can load-balance up to four unequal cost paths. To do so, use the variance n command to instruct the router to include routes with a metric of less than n times the minimum metric route for that destination. The variable n can take a value between 1 and 128. The default is 1, which means equal cost load balancing.

Which commands would be used to enable Enhanced Interior Gateway Routing Protocol (EIGRP) on a router, and configure the IP addresses 10.2.2.2 and 192.168.1.1 as a part of complete EIGRP configuration? (Choose three.)

Explanation:
The router eigrp 10 command is used to enable EIGRP on a router. The network 10.0.0.0 and network 192.168.1.0 commands are used to activate EIGRP over the interfaces configured with IP addresses 10.2.2.2 and 192.168.1.1. If we were given the subnet mask for the two interfaces, we could include that in the network command as well.

The following command sequence is used to configure EIGRP on a router:

The parameters of the network command are:

If either the AS numbers do not match between two EIGRP routers or one end is not configured with EIGRP, no EIGRP routes will appear in the routing table of either router, because they will not have formed an EIGRP neighbor relationship. In this situation you will be able ping between the routers, but you will not be able
to ping LANs attached to the other router.

Which of the following is NOT a packet type used by Enhanced Interior Gateway Routing Protocol (EIGRP)? 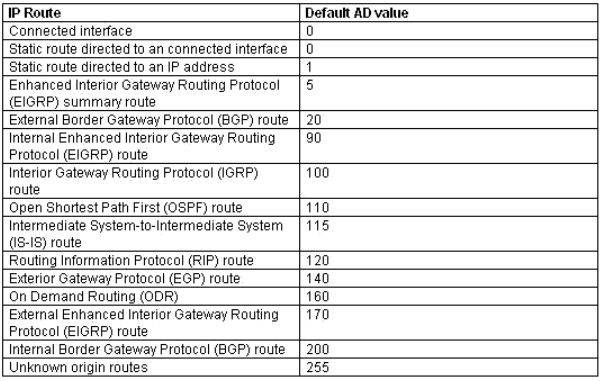