You are the switch administrator for InterConn. The network is physically wired as shown in the diagram. You are planning the configuration of STP. The majority of network traffic runs between the hosts and servers within each VLAN. 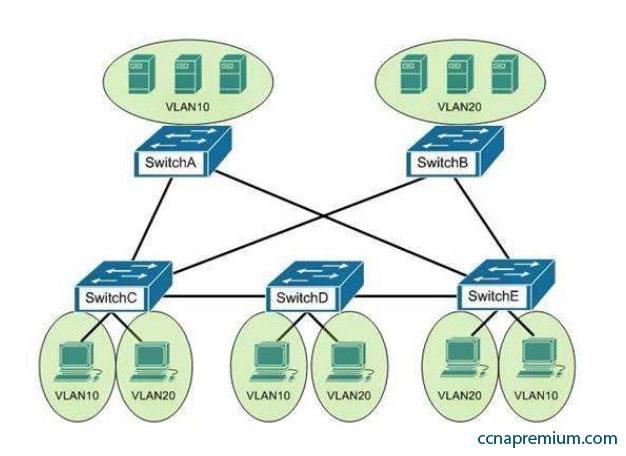 Explanation:
You should designate Switch A for VLAN 10 and Switch B for VLAN 20. The STP root bridge for a particular VLAN should be placed as close as possible to the center of the VLAN. If the majority of network traffic is between the hosts and servers within each VLAN, and the servers are grouped into a server farm, then the switch that all hosts will be sending their data to is the ideal choice for the STP root. Cisco’s default implementation of STP is called Per-VLAN Spanning Tree (or PVST), which allows individual tuning of the spanning tree within each VLAN. Switch A can be configured as the root bridge for VLAN 10, and Switch B can be configured as the root bridge for VLAN 20, resulting in optimized traffic flow for both.

None of the other switches is in the traffic flow of all data headed towards the VLAN 20 or VLAN 10 server farms, so they would not be good choices for the root bridge for either VLAN. Care should be taken when adding any switch to the network. The addition of an older, slower switch could cause inefficient data paths if the old switch should become the root bridge.