Which Cisco IOS command would produce the following output? 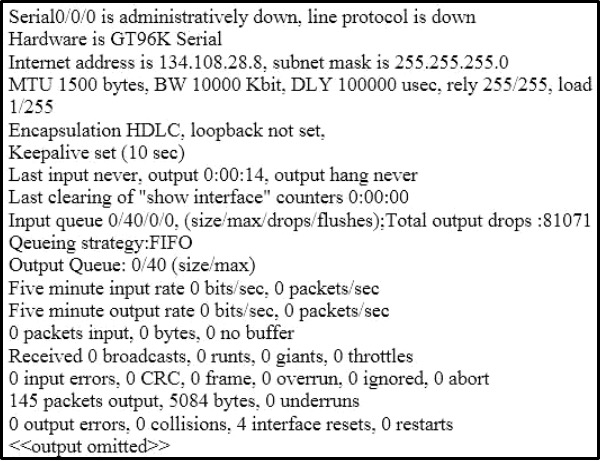 Explanation:
The output given in the question is produced with the show interfaces command. This command is used to view the statistics for the configured interfaces on the router. From the sample output, we can determine the following facts:
The interface has not been enabled, as indicated by the first line Serial0/0/0 is administratively down. It is not ready to for to forward packets. To enable it, the no shutdown command should be entered.
Line 3 shows that the subnet mask is 255.255.255.0.
Line 3 shows that the IP address is 134.108.28.8, a public IP address. Line 6 shows that the encapsulation is HDLC, which is the default.
The interface is NOT connected to a LAN, because it is a serial interface.

Two fields worth mentioning in the output of the show interfaces command are the no buffer and the ignored fields. The ignored field shows the number of received packets ignored by the interface because the interface hardware ran low on internal buffers. The no buffer field shows the number of received packets discarded because there was no buffer space in the main system. When either of these two counters begins to increment, it could be the result of a broadcast storm.