You are a network administrator for your organization. Your organization has two Virtual LANs (VLANs) named Marketing and Production. All switches in the network have both VLANs configured on them. Switches A, C, F, and G have user machines connected for both VLANs, while switches B, D, and E have user machines connected for the Production VLAN only. 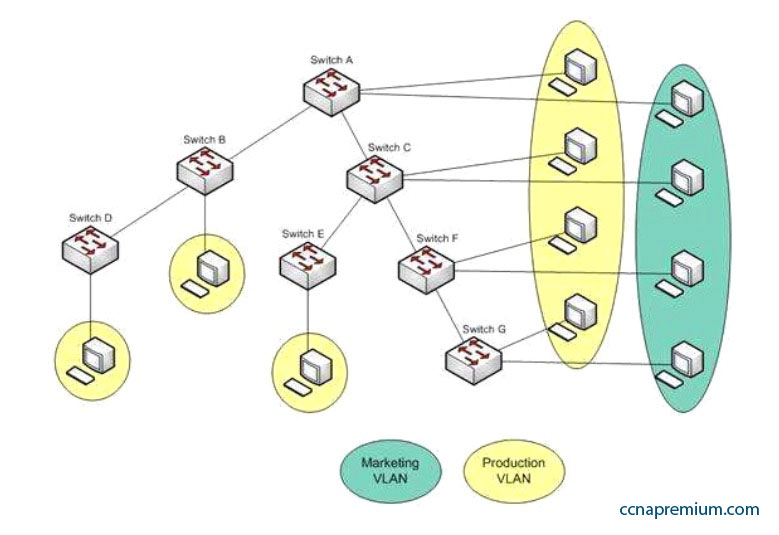 To reduce broadcast traffic on the network, you want to ensure that broadcasts from the Marketing VLAN are flooded only to those switches that have Marketing VLAN users. Which Cisco switch feature should you use to achieve the objective?

Explanation:
The VLAN Trunking Protocol (VTP) pruning feature of Cisco VTP allows switches to dynamically delete or add VLANs to a trunk. It restricts unnecessary traffic, such as broadcasts, to only those switches that have user machines connected for a particular VLAN. It is not required to flood a frame to a neighboring switch if that switch does not have any active ports in the source VLAN. A trunk can also be manually configured with its allowed VLANs, as an alternative to VTP pruning.

All other options are incorrect because none of these features can be used to achieve the objective in this scenario.

The Per-VLAN Spanning Tree (PVST) feature allows a separate instance of Spanning Tree Protocol (STP) per VLAN. Each VLAN will have its own root switch and, within each VLAN, STP will run and remove loops for that particular VLAN.

Rapid Spanning Tree Protocol (RSTP) is an Institute of Electrical and Electronics Engineers (IEEE) standard. It reduces high convergence time that was previously required in STP implementations. It is interoperable with STP (802.1d).

With dynamic VLANs, the switch automatically assigns a switch port to a VLAN using information from the user machine, such as its Media Access Control (MAC) address or IP address. The switch then verifies information with a VLAN Membership Policy Server (VMPS) that contains a mapping of user machine information to VLANs.