Which of the following cables would be used to connect a router to a switch?

NOTE: The one exception to this general rule of connecting unlike devices with a straight-through cable is when a computer NIC is connected to an Ethernet port on a router. In that case, a crossover cable is used.

A v.35 cable is used to connect serial connections between routers. This cable has a male DB-60 connector on the Cisco end and a male Winchester connector on the network end. It comes in two types: DCE and DTE. It is often used to simulate a WAN connection in lab environments. In that case, the DCE end acts as the CSU/DSU and is the end where the clock rate is set. A CSU/DSU (Channel Service Unit/Data Service Unit) is a device that connects the router to the T1 or T3 line.

A crossover cable has two wires reversed and is used to connect “like” devices, such as a switch to a switch. It is also used when a computer NIC is connected to an Ethernet port on a router.
A rollover cable is used to connect to the console port of a router to configure the router. It is also called a console cable. The diagram below illustrates the correct usage of each of the cable types shown using the following legend: 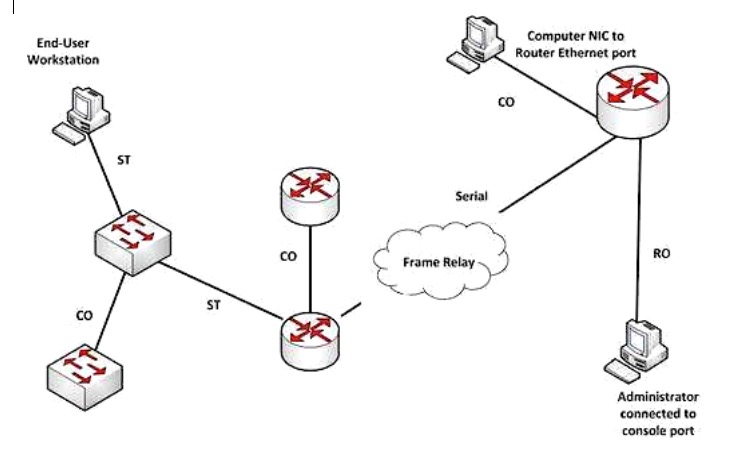